Today, instead of being a day of words and of stories, observations, strange happenings in Porto or intrigues on the grapevine, instead of pictures of the city, the grand tiled Portuguese homes, instead of beautiful pictures of the sun setting into the Atlantic, instead of quips and profound thoughts, tales of eccentrics, discoveries, forgotten truths, instead of revelations, confirmed expectations, sorrows, moving anecdotes, carefree thoughts, reminisces of successes and projects doomed to failure, instead of warm thoughts passed on by fantastic people, warnings about the nasties, dad jokes and secrets, instead of beautiful dreams, dark troubles, impossible tasks, pleas, requests and the contemplation of ideas, instead of sharing experience and experiences, passing on news and taking the baton, instead of crying with joy, weeping in front of a guitar, screaming at the top of your voice and giving, today will be only the visuals supported of course by the music. This text does not exist.

We are happy to announce the exclusive release of not one but two new videos and another world premiere at jammerzine.com. The first video is for the second single and the title track from Life This Way, the Space Summit album released next week on September 10th through Schoolkids Records with pre-orders available for the limited blue vinyl coming early next year. Individual videos were recorded by each band member in their own part of the world – Jed in Minneapolis, Minnesota, Phoebe in Sabah, Borneo, Ed in Bristol, England, Sophie and Nicklas in Stockholm, Sweden, and Olivia and I in Porto, Portugal.

The second video is for the latest single Queen Elizabeth’s Keys with footage collected to compliment this paean to the fairytale of England. Having grown up there and hearing Jed write these lyrics from the perspective of an American is really rather heartwarming.

Included below for the hat-trick is the first video for the first release from the album, I’m Electric, with its crazy skulls and freaks and circus entertainers. Colourful and dark, creepy and friendly, a pantomime of characters.

Swimming today, another triplet of miles in the week. Rushing back for two seshes in a row with Stephen in DC where we sang and Fred in Minneapolis where we discussed guitars and effects, whilst Olivia went roller-skating with her Polish friend. I followed her back out of the house as she dropped in and dropped off her skates for a trip to the psychedelic psupermarket where we stood and stared in wonder at the romanescos, buying three examples. I lovingly picked two heavy papayas and wondered at the bakery how to ask the woman in any language if the bread rolls were soft or hard? With an ingenious response to the question (which she somehow understood despite not having the words to explain it), she stretched back from the counter and pulled a disposable blue plastic glove out of a box and asked me to hold out my hand as she stretched the glove over my digits and proceeded to place the bread roll between my fingers to have me squeeze it. Some people are just born to make the world a better place.

This was the official video for Space Summit’s first single, I’m Electric:

Later, a quick dinner of falafel, hummus, avocado and arugula which Olivia prepared on skates, not really although I did once see George Clinton’s Parliament/Funkadelic ensemble where one of the girls in the band spent the whole show on roller skates, impressive. I had a sesh with Noel where I tried to get some guitar on one of his tracks – nearly.

Then as it was quite late I decided that I would just post the exclusive videos today and not accompany them with any writing. No time, nothing to say, tired, busy, no space, as if. 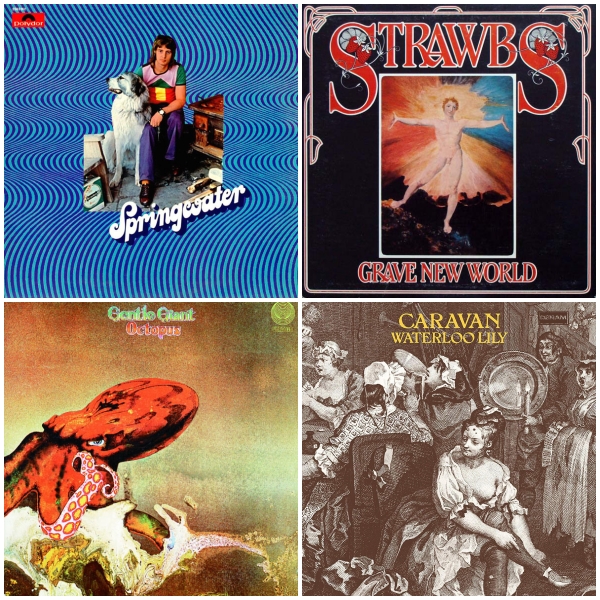 Music today came from a message from my mate Biggles in London who had heard Springwater (Phil Cordell) today on the radio. I wasn’t aware of him but I listened to the album from 1972 and really liked it. I found it on Discogs for 8€ and bought it only to receive a message five minutes later saying it wasn’t available, ah well at least I’m aware of it now. That set me off on listening to four albums from 1972, so I listened to Strawbs‘ fourth album Grave New World from the same year before listening to Gentle Giant’s fourth album Octopus from the same year and last but not least Waterloo Lily by Caravan released in, yes you guessed it, their fourth album released in 1972. It was also almost a tribute to the 72 laps I swam today!