I did yoga today, I randomly picked a beginner YouTube video, put down the yoga mat that was here in the flat when we moved in and proceeded to see what my body thought of the idea. Well, my body hated it and did everything it could to make me stop. It made easy-looking poses seem difficult, it made simple stretches painful and on top of that the space I was in was too cramped and the mat too small. I suppose it sounds like it’s not going to work but I love a challenge and what I learnt from this terrible experience is that my body is a disaster. Tight, pains in my neck, lower back, and into my legs, pins and needles in my left arm, wrist pain after playing guitar, and regular ocular distortions that might just be due to lack of flexibility and stiffness in the neck and shoulders. Some research has also suggested that I have a sciatic nerve issue and walking has become a problem. As I write this I’m about to go out to the shops, see how I go because walking too far soon turns into the need to sit like a 21st century Albert Tatlock. 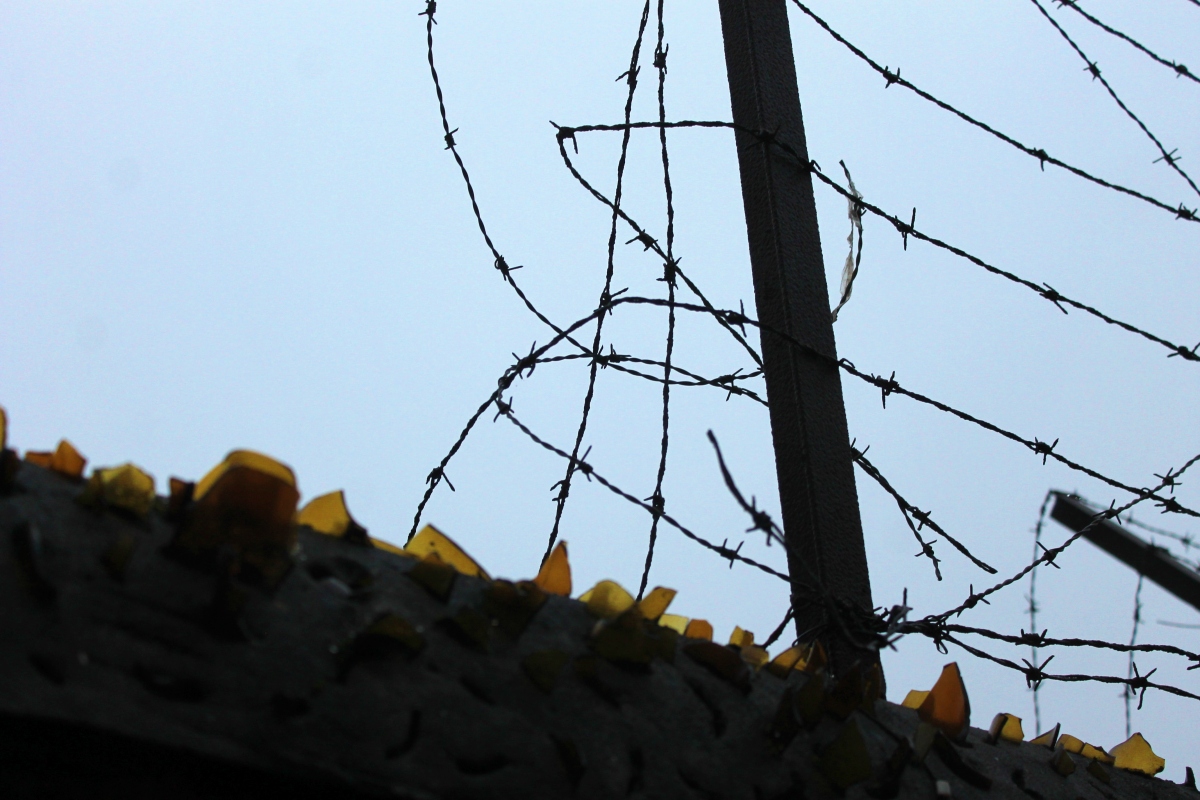 The light was fading but it was already dark in the day, there was a low mist that hadn’t dissipated despite having all day to do so. The rain fell constantly. I looked out of the window to see the puddles bubbling over with new raindrops and waited for it to ease off before we went on a trek to one of the supermarkets that’s a 15-minute walk away. As soon as we walked outside I wanted to take photographs to see if I could capture the atmosphere, it was odd to see a large palm tree shrouded in mist and we went to the Marquês square, a slight detour to take a couple of pics before we headed to the shop. The traffic seemed a little less than usual, I suppose due to the lockdown but there were people about on the streets, umbrellas open, different shapes and sizes and some of the larger umbrellas were making it tricky to pass each other on the narrow pavement. On the way to the shop we passed a high wall where we had taken a picture before of the orange trees on the other side, Olivia noticed that the top of the wall was embedded with jagged glass with barbed wire continuing along its length. It seemed excessive to protect oranges but I guess we live in a world where haves and have nots struggle to keep their gold or take it and I’m sure that beyond this wall there was more than just the trees.

It was good to go out, whatever the weather, get some exercise, try and loosen up this 62-year-old hunk of flesh and bone, oil it with movement. In the good old days, you never thought about your body, it just did everything you wanted it to, you didn’t even have to ask or as it is these days, plead. But it needs good management, I’m lucky, I don’t drink, vegetarian for 37 years, I can’t imagine how it would be to carry around a body that you had been abusing your whole life. Now as we approached the supermarket I was feeling ok, a bit wet, brolley very wet and I realised that I didn’t bring anything to put the wet item in, so I just rolled it up as it was small and put it in my big coat pocket. Inside the shop as usual too hot for me after walking, wearing a big coat and suddenly indoors. It wasn’t too painful, we weren’t in there that long and it wasn’t so busy. On the way back it started to rain again, it had been on and off since we left the house. It’s usually about now, 40 minutes in, that I start to see glorious visions of chairs. Also carrying some heavy bag full of bottles of sparkling water and other essentials. When we got in Olivia went straight out again to the nearer supermarket to buy some things that we usually get there, different supermarkets, different essentials. The reason she went by herself was that in that one hour away I was about done for standing up. It’s not terrible but it’s welcome relief. I’m hoping the yoga is going to help, that and the eventual return to swimming and the transporter from Star Trek to get acupuncturist/sessioneer Matt over from Brooklyn. I hope it doesn’t sound like I’m complaining, I’m not, it’s just how it is and with a little bit of dedicated repair work, I’ll be back on track before you can say, Adho mukha savanasana. 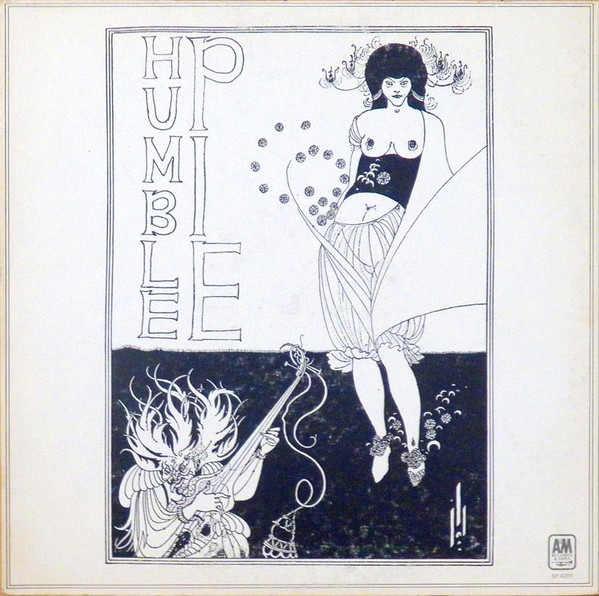 Music today is from Humble Pie and the video is their first single released on Andrew Loog Oldham’s Immediate label. The song didn’t appear on the English debut, As Safe As Yesterday Is, but was there on the US version. The band made two albums for Immediate before they went bankrupt, both released in 1969 (Town and Country was the second album). They then signed to A&M and made the Aubrey Beardsley album, actually self-titled and released in 1970 but with a Beardsley illustration on the cover.

This is the album I listened to tonight, twice. Odd and eclectic, harder in places, opening with Live With Me, that great Humble Pie feel with Stevie Marriott, Peter Frampton, Greg Ridley on bass, and Jerry Shirley on drums. Shirley actually sings the second track (a rare occurrence), sounds very stones country irony influenced to me, plus it’s called Only A Roach (the smokey type). John Wilson from Taste plays drums. These albums might not turn everyone on direction wise, but for me, it’s the feel and the sound that I like. Marriott’s voice is amazing, Frampton’s guitar playing distinctive. Frampton’s Earth And Water Song closes Side 1, a soft acoustic song that might have found itself on a Crosby Stills & Nash album, sung by Stills in a parallel universe.

Side 2 opens with a stirring version of Willie Dixon’s I’m Ready. Despite Marriott’s amazing voice, Frampton and Ridley all sang lead vocals as evidenced on the Natural Born Boogie single video. Theme from Skint (See You Later Liquidator) dedicated to Andrew Loog Oldham’s label demise was another country twinged ditty with B.J. Cole on pedal steel guitar that eventually finds its way to the Rock band that they are and concludes.

Red Light Mamma, Red Hot! won’t have you searching the lyric on the net but it might draw you to Marriott’s voice, if you like that kind of thing. Chunky guitars and I guess Frampton is on his ’54 Les Paul and Marriott possibly a Guild (having seen him with one around the time). It’s one of those ‘you have to listen to it in the spirit of the times’ albums and bear in mind that at this point Jerry Shirley was just 18 and on his third album with the band. A good seventies jam occurs at the end of the song with Stevie also on the harmonica. But back to how old they were – Frampton was 20, Marriott and Ridley (ex Spooky Tooth) both 23. The album ends with Ridley’s Sucking On The Sweet Vine.

Marriott was tragically killed in a house fire in 1991 aged 44 and Ridley died of pneumonia aged 56. Frampton was supposed to be playing his farewell tour when the pandemic hit. Olivia’s dad had tickets. Apparently, he has some debilitating disease and he won’t be able to play guitar anymore, Jerry Shirley has tried to keep the Humble Pie name going but as a tribute band with other musicians, not including himself. Seems like R’n’R will never die even when It literally has.