The problem with normality is that sometimes it’s cruel to those who don’t live in a world of mornings. This morning we were up at 6.30 AM for one of those red tape challenges.

When you usually hit the sack between 3 AM and 6 AM on your normal day and suddenly you have to be up at 6.30 AM on their normal day it’s a challenge and now at 11.30 PM after being awake all day with little sleep, three seshes, red tape, approving an Ahad mix, walking in the city up mega-steep hills, I’m struggling to stay awake. We did get to bed a little earlier but then you just can’t sleep easily because it’s not your normal time. On top of that as I lay there trying I heard the evil squeaky buzz of a mosquito. I got up fast, Algarve guide book in my hand, put the light on, and there it was on the white wall – a huge blood-sucking monster. I had it, I struck, I missed, it landed again, I struck, I missed again, noooo, it got away. I prowled the room for a while but it was gone but then a smaller one was dancing around the ceiling, that one was fast but I think I got it, I never seem to have the corpse as proof. Olivia suggested I put the light on in the front room to attract them out of our bedroom, it seemed to work, I woke up biteless.

I jumped in the shower a 6.35 AM, you have to be quick in there because the water runs cold. I found Badfinger’s Straight Up on Spotify for inspiration and after a bowl of cereal and a cup of Celestial Seasonings Tension Tamer with honey, I was ready to leave the house at 7.25 AM. Olivia dies in the mornings and her corpse rose and moved slowly banging against the walls, shedding limbs until eventually she took a breath and was alive. We walked down the stairs and out into the street, the light was dull and recent, even Starbucks was closed and as we walked past it Olivia suggested we didn’t take the main road route to the fiscal number office. Back streets, narrow, windy, cobbled, and very steep, it was exhausting. An old lady in front of us walking up the same hill carrying her wares on her head, breathing steadily, I nearly died. Another lady wished us God’s luck and a Happy Christmas in that unmistakable Portuguese old lady shriek. At the top of the endless hill, we came upon beautiful buildings, art deco, tiled churches, ruined apartments and we stumbled across the famous Lello bookstore – closed.

We arrived at the fiscal office 20 minutes early. We were meeting Carla from the office that is helping us with this tricky admin stuff at 8.30 AM. We then stood there for another 30 minutes till they opened – we had no appointment, the next available one was in March. When the lady opened the door Carla explained that we were Brexit victims and could she try and help as it was urgent. Long story but she helped and now we wait. We need this number before the immigration interview on the 30th…Agggghhh.

We walked towards the health food store that we found the other day, stumbling across a vintage clothes store and a record store on the way. Nice people, Olivia bought a dress from Ana who works there and I found a couple of albums – Keith Christmas’ Pygmy (1971) and Poet Laureate Sir John Betjeman’s Late Flowering Love (1974 on Charisma Records). We found the healthy shops and got the subway back to the house and I was straight into seshes/chat with Ahad, then Stefan in Germany, and Hans in the US. Now I am death and I am going to have one more cup of tea, one pastel de nata, and one mosquito stalking run, and then I will lay down and die. 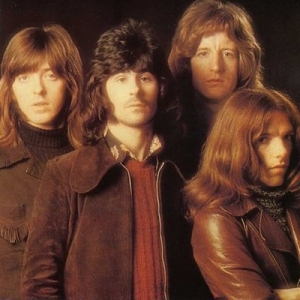 Music today has been and continued to be Straight Up (1971), I never tire of this album, fantastic songs, not just the singles Day After Day and Baby Blue, but the classic opener Take It All, poignant when you know the tragedy of the band. Essential classic. Good night.